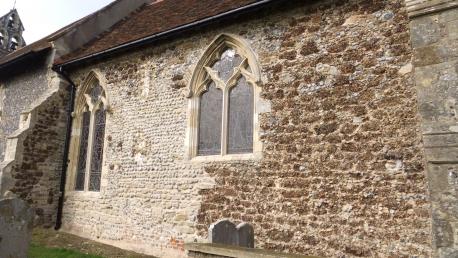 PIERRA were appointed the stone masonry and conservation contractors on this Grade I listed church which largely dates to the 14th Century. The church is predominantly built of knapped flint with stone dressings with the Chancel being of pudding-stone.

The Nave and Chancel also underwent structural repairs to tie the knapped flint walling to the original pudding-stone walling beneath. Following the tying of the walls extensive grouting was completed using PIERRA’s specialist lime based heritage grout.

Other work included conserving the Bath stone dressings to the Bell Cote and aisle windows using a combination of lime shelter-coating and lime based mortar repairs. The south elevation of the Chancel, consisting of both flint and puddingstone, was completely repointed using lime based mortar following the removal of the hard cementitious ribbon pointing.

The project won the 2013 King of Prussia Gold Medal Award for the conservation repairs.