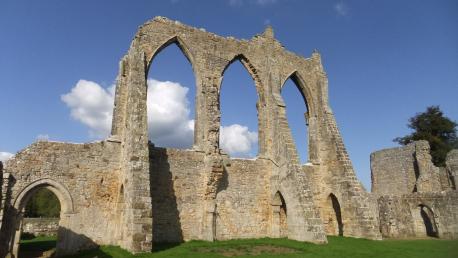 Bayham Abbey, lying within the valley of the River Teise, was founded in the 13th century and was built from golden local sandstone. The ruins, now a Scheduled Ancient Monument, include much of the 13th to 15th-century church, the chapter house, and a picturesque 14th-century gatehouse.

Prior to any work commencing, PIERRA's specialist conservation team, alongside the Architect and Historic England, first embarked upon an investigation period for reassessment, confirmation of a detailed schedule of works and archaeological recording of the South Aisle, Nave, Chapter House, Cellular's Under-croft, Lavatorium Cloister and Cloister walls .

Following this PIERRA’s team of trained Heritage Façade Preservation specialists conserved one of the nation’s most treasured cultural assets by undertaking a wide variety of specialist methods and techniques including micro-pinning and lime conservation of spalling and laminated stonework, judicious indent repairs in Sussex sandstone to the decayed walling, string course, hood mould, window tracery and plinth stonework, the removal of defacing cementicious mortar, re-pointing, lime grouting, lime conservation of friable surfaces of stonework and the introduction of specialist Cintec anchors to the buttresses to ensure ongoing structural integrity.