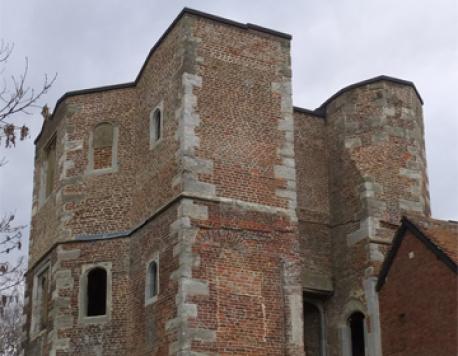 PIERRA’s specialist conservation division were deployed to conserve and repair the remaining Tower and Gate House of this once splendid 16th Century Anglo-Saxon estate, which is now one of our nations Scheduled Ancient Monuments.

The tower had been neglected over a number of decades resulting in the roof covering and structure being dilapidated resulting in large amounts of water ingress which lead to the original lime mortar being washed away. A consequence of which was that the brick walls and the Kentish Rag stone masonry between the main tower and staircase were collapsing meaning the roof structure was being undermined and at risk of collapsing.

The specialist division of the company worked closely alongside the project Archaeologist to record all existing masonry moldings, profiles and remnants of architectural interest. This was carried out, firstly, prior to any works were initiated and continued throughout the essential conservation repairs.

The roof structure was temporarily supported whilst the collapsed areas of brick and stonework were re-built so that the new timber beams were supported and structurally stable. Once the tower was water tight further extensive, and highly sensitive, brick and Kentish Rag stone stabilization and replacement was carried out internally including the re-building door openings, walling and the selective infilling of the original joist seating with reclaimed hand made clay tiles and lime mortar.

Externally, the brickwork had endured poor cement based repointing which was detrimental to the large majority of the original soft red brickwork. The hard cement based mortar, which to large areas of the facades was a shallow over-point, was carefully removed by hand revealing the original lime based pointing with only small areas being repointed in the new lime based mortar which was achieved through an extensive sampling process.

The Kentish Rag stone dressings, both internally and externally, were either heavily repaired with hard cement based mortar or significantly eroded due to many years of weathering. Where feasible, following the removal of the cement based mortar repairs, the dressings were consolidated with a combination of sensitive lime based mortar repairs and shelter-coating. Where dressings were severely deteriorated new Kentish Rag stone units were installed to match the existing and original details using the profiles recorded prior to the start of the works. To ensure an exact match to the existing all of the replacement stone was hand carved on site by PIERRA’s specialist team of highly experienced and qualified banker masons.