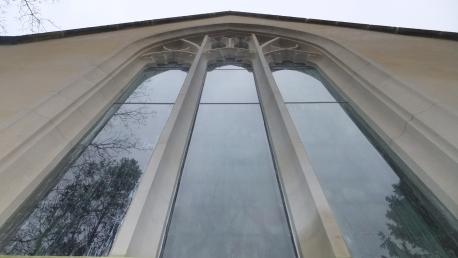 This Grade I listed church with 13th century origins, built on a manor with a history that can be traced back to the Domesday Book of 1086, was extensively altered in 18th and early 19th centuries. Outstanding overall as an extreme example of 19th century antiquarian interests, for the quality of its collection of imported 15th and 16th century timber fittings and stained glass mostly introduced in 1834 by Lord Monson. The family pew is described by Pevsner as ‘among the best in the country’.

The stonework and historically important glazing to the windows of the Transepts, and most notably the 16th Century east windows of the Chancel and North Transept, were deteriorating significantly and required essential repair and restoration works for which the HLF awarded a grant for these to be carried under the expertise of PIERRA.

The stained glass was removed from site and meticulously restored by the Specialist Glazing Conservator whilst PIERRA undertook masonry conservation works to the window surrounds reforming the jambs and mullions and ornate detailing to the traceries including the replacement of the mullions to the Chancel east window.

The east gable wall and buttresses were also completely restored by removing the damaging cement based render and replacing with lime based mortar.