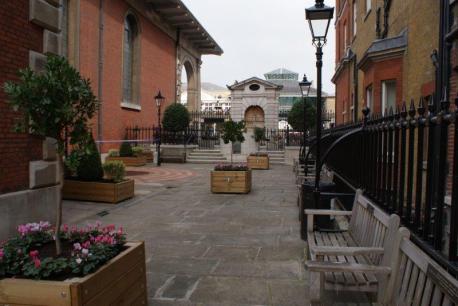 With the courtyards of the church open to the public each day the Yorkstone paviours were becoming a significant health and safety issue as large areas of pointing had eroded away resulting in the bedding and substrate beneath the paviours being largely non-existent meaning significant areas of the courtyard being uneven and hazardous to walk on.

Having been left with no other choice than to close the courtyard the church and acting Architect for the church designed a scheme whereby the paving was not only to be re-laid but to incorporate an element within the scheme to celebrate the Queen’s Jubilee. The Jubilee Garden was thus born.

The yorkstone paving was photographed, labelled, carefully taken up and set aside for re-fixing. PIERRA then excavated the substrate and a new reinforced concrete slab, built in interconnecting bays, was constructed including the formation of a new drainage galley. The paving was then re-laid and matching the original layout with the inclusion of a new brickwork maze with a 2.1 m diameter cast iron coin set in the middle of the maze to commemorate the Queen’s Jubilee. The garden was then further enhanced with the supply and installation of new lamp posts, planters and trees.